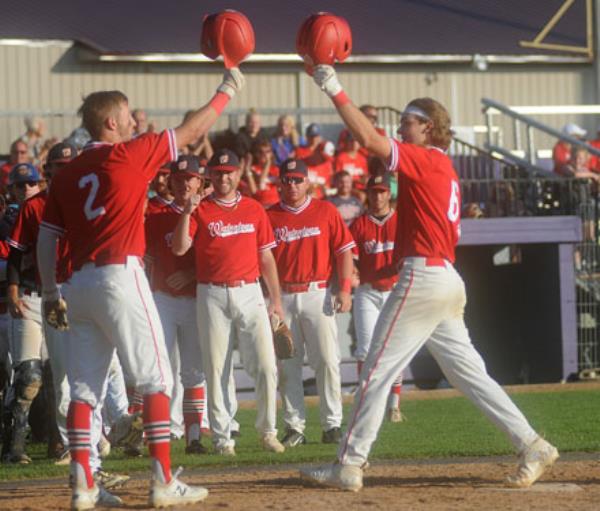 The 2022 Class C state title is up for grabs once again after defending champion Sobieski once again moved up to Class B. Joining the Skis in Class B this season is perennial title contender Young America, all of which will make for an interesting state tournament.

Our experts came away impressed with Watertown’s run to the state title game last year and they’ve selected them as the preseason No. 1-ranked team.

St. Patrick, the 2020 state runner-up has a lot to be excited about at Bonin Field, and our pollsters picked them for the No. 2 slot.

Waconia, which spent much of last year at the No. 1 spot, begins this season as the No. 3-ranked team, followed by another tournament favorite, Sartell Muskies.

Alexandria put together a run to the semifinals last year and our experts selected the Black Sox as the No. 5 team.

Watkins, which also made a run to the semifinals, begins the season at No. 6, followed by 2020 state champ Fairmont.

After an impressive 2021 campaign and a big name, Loretto moves into the top 10 at No. 8 while Maple Lake at No. 9 and the Milroy Yankees at No. 10 round out the final spots.

1. Fairmont Martins - Champs from 2020, were not eligible to play in last year’s state tournament.

2. Waconia Lakers - With Young America moving up to class B, the Lakers will be one of the favorites in the Crow.

3, St. Patrick Irish - State runners-up in 2020, advanced to the final 8 last year, Favorites in the DRS

7. Alexandria Black Sox - Got to the final four last year before losing to Sobieski.

8. Jordan Brewers - Tough loss in their first game at state last year, but always a team ready to make a run at the state title.

9.Faribault Lakers - Lakers pitching staff is healthy heading into the season, Lakers poised to get to state this year, with the tournament being held in Faribault.

2. St, Patrick Irish - A perennial Labor day contender, with great mix of veterans and young talent and lots of improvements and lights and Bonin Field

5. Sartell Muskies - One of the best teams every year, won 30 games.

7. Bluffton Braves - Region 14 champs and continue to make noise out of the north. Pitching keeps them in games. Can they piece it together on offense

8. Watkins Clippers - 21-4 record - Region 11 champs and final four team, move to Region 15 with the Stearns County boys. One of the best pitchers in the state leading the Clippers in Matt Geislinger.

1. Watertown Red Devils - Watertown is one of those 20-30 teams in the state that you always thought could get into a state championship game and they finally did in 2021, narrowly missing out on a Class C title.

2. Alexandria Black Sox - These guys had a great run through the state tournament last year, making the final four and just missing being in the final.

3. Watkins Clippers - Like Watertown, the Clippers always seem to be in the conversation when talking about the top teams in the state. They play in the Central Valley League, which has produced top Kimball and Cold Spring teams in recent years, as well as a Luxemburg squad that made some noise at state last year. With left-hander Matt Geislinger on the mound, the Clippers can beat anybody.

4. Waconia Lakers - This is another perennially strong club that made some noise in last year's state tournament.

5. Sartell Muskies - This veteran club continues to be the top team in the Sauk Valley League. Expect the Muskies to be strong once again.

6. Milroy Yankees - The top outfit from the Corn Belt League will be a top-10 contender once again.

8. Maple Lake Lakers - The North Star League always has a couple of teams to watch for a top 10 poll and Maple Lake got as far as any of them last season.

9. St. Martin Martins - They wound up being the top team in the Stearns County League and figure to be strong once again.

10. Foley Lumberjacks - The Lumberjacks will be one of the top Class C teams in the Victory League and Region 8C now that Sobieski is back in Class B.

1. St. Patrick Irish – A team that's been knocking on the door the past few seasons. With a few powerhouses moving to Class B, the Irish now become one of the favorites.

2. Loretto Larks – Good mix of young talent and veteran experience. Balanced between good pitching and strong offense. A team to watch throughout the season.

3. Fairmont Martins – A team that was forgotten about after being ruled ineligible last year. Look for the Martins to come back strong after winning the 2020 title.

4. Watertown Red Devils – Class C runner-ups a year ago. Chance to prove it wasn't a fluke. One of the top pitching staffs in the state. Young talent is now veteran leaders. The upside for Watertown is huge.

5. Sartell Muskies - Always one of the top teams. Expect them to be good again.

6. Isanti Redbirds – My sleeper last year. Still high on the Redbirds. Should be in store for another big season.

7. Watkins Clippers – Always one of the most consistent teams. Coming off a run to the final four a year ago.

8. Jordan Brewers – Always good. Compete in a tough RVL league that always has them ready to roll come postseason.

10. Carver Black Sox – A perennial state tournament team out of the Crow River Valley League. Should be a top team in the CRVL and in the state once again. Good pitching and a better offense.