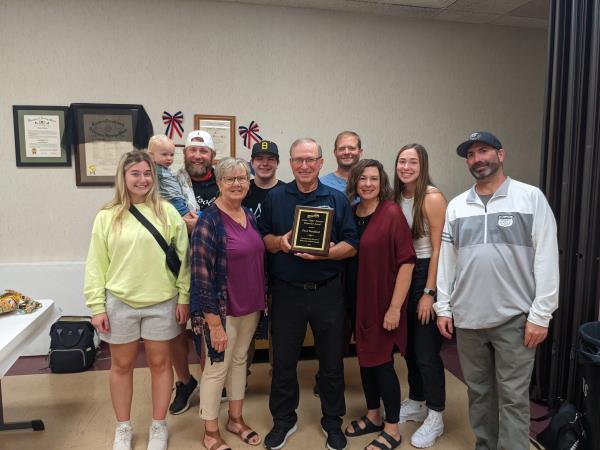 The game of baseball has served Dave Wendlandt well and he’s made a point of being a servant to the game with his countless hours around the game.

Wendlandt grew up playing the game in Brownton through high school and eventually into amateur baseball. He’s received a number of baseball awards through the years and he added the Mike Downes Memorial Award in October for his outstanding service to amateur baseball.

Wendlandt started playing amateur baseball in 1960 and has remained active in that world through coaching and scoring state tournament games each year.

“This one is special,” said Wendlandt, who is also a member of the Minnesota Amateur Baseball Hall of Fame. “It’s special because it’s a lifetime service award to baseball, given out by the state amateur baseball board.”

Wendlandt began his managing career for the Brownton Bruins in 1966. Brownton finished state runners-up that year and he continued to manage the team into the mid-1980s when Doug Schuette took over. You can still find Wendlandt working on the field until the snow finally sticks, but more often he’s working with kids in the summer park and recreation baseball and softball programs, teaching the fundamentals of the game.

“They’re all well-deserved awards,” Schuette said. “Dave’s put a lot into baseball at all levels. He’s real good with the young kids because he’s really patient.”

Wendlandt began his teaching career as an elementary school level before going back to get a degree to teach special education children.

He coached the Brownton High School baseball team until it closed and got paired with Stewart to form McLeod West, which later closed in 2009. Since then he’s served as a volunteer assistant with the Glencoe-Silver Lake program.

A year before McLeod West closed, the Minnesota High School Baseball Coaches Association named Wendlandt the Dick Siebert Award winner, which is given to an individual who has given a great deal to high school baseball.

Through the years Wendlandt has helped Brownton land state tournaments and served as a chair. It was in 1996 when Brownton hosted the state tournament with Glencoe that Wendlandt started keeping the official book for the MBA. He only worked some of the games that year before doing it for the whole tournament in 1997. He hasn’t missed a tournament since 1999.

“The main thing is to be there for the whole tournament and see many of the teams play,” Wendlandt said. “Many outstanding players and games, it’s kind of a three-week vacation for me.”

Though Wendlandt’s teams had gotten close to state titles in the past, it wasn’t until this year that one of his teams won a state championship when Glencoe-Silver Lake beat Belle Plaine 10-0.