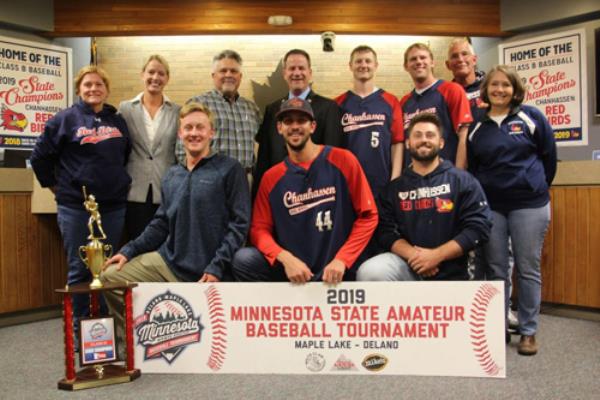 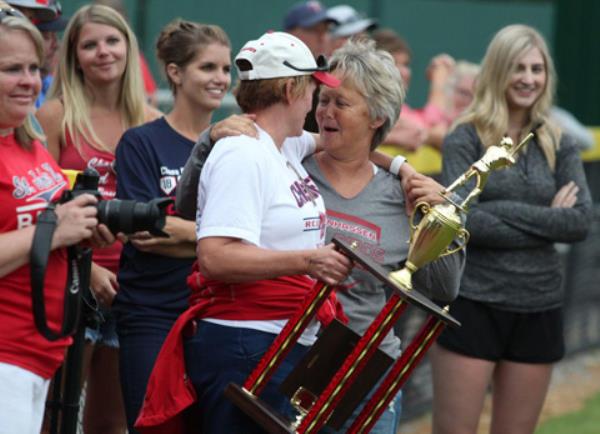 A LEAGUE OF HER OWN: Chanhassen's Kemble becomes first woman commissioner
Posted on Nov 30, 2021

Terre Kemble has broken baseball barriers throughout her life so it’s somewhat fitting that she became the first woman commissioner in Minnesota Baseball Association history.

Kemble has become synonymous with the Chanhassen Red Birds since their rebirth in 2010. She helped form the team and serves as the team’s general manager. Among the Red Birds team and fans, she’s known as Mama Bird.

“It’s probably long overdue,” said MBA Director Gary Schleper, who manages the Shakopee Indians in Section 3B. “For her to step in and be willing to step in, it offers us a new perspective.”

Kemble will oversee Section 3B, taking over for longtime commissioner John Breimhorst, who died in August. Kemble played an integral role in forming the Red Birds and helping with website work for Section 3B.

“He would come and chit chat a lot,” Kemble said of working with Breimhorst. “I don’t know if I’ll be able to fill those shoes but I’ll try.”

Ken Strand lived near Kemble at the time and she told him he was going to help build the town team with her. Strand had baseball experience from his time running concessions at Met Stadium. The two knew each other as neighbors and volunteered as scout leaders.

“She’s the heart and soul of that team,” Strand said. “The players appreciate it, too. She’s the first person they’ll come up to and give her credit.”

Kemble was one of the most experienced baseball people around Chanhassen when the team started, though she’d never seen an amateur baseball game before the Red Birds took the field. She spent much of her career working with minor league organizations in a variety of roles.

Kemble grew up in Massachusetts and learned the game from her father, Butch, while they listened to games on the radio.

While in college, Kemble took an internship with the AA affiliate of the Milwaukee Brewers in Holyoke, Massachusetts. As an intern she did whatever was needed around the park, including getting the field ready before games. She did such an impressive job that the president of the AA Eastern League, P. Patrick McKernan took notice. When he started an organization in Albuquerque, New Mexico, he offered her a job with the Albuquerque Dukes, the AAA affiliate of the Los Angeles Dodgers.

Kemble spent four years in marketing, public relations and eventually became assistant general manager of the team while greats like Orel Hershiser, Fernando Valenzuela and many others passed through before reaching the big leagues. Kemble also met her future husband, Bill, there. The two tried to land a job with the Minnesota Twins before returning to Massachusetts. They eventually settled in Chanhassen.

When the new Chanhassen school district opened in 2009, Kemble got involved with the booster club and later amateur baseball. Team organizers put an ad in the paper to recruit players for an open tryout and also put an ad in the paper for a public address announcer. They found players and the team’s first manager, Chris Reuvers.

Reuvers, who played with the Faribault Lakers, but lived in Chanhassen, answered the ad for the public address announcer position. Instead of announcing, Kemble asked if he wanted to manage the team.

“It took me about a second, then I thought, ‘This is what I’m supposed to do. I need to manage this team,’” Reuvers said. “It was a new challenge.”

So, the Red Bird embarked down the path to fielding a team with a first-time manager and a general manager unfamiliar to the world of amateur baseball. But neither one backed away from a challenge.

Chanhassen faced neighbor Chaska for the first time in June that year and built a 4-1 lead, only to see it slip away in an 11-4, 10-inning loss.

“There were more people at that game that night than there were for the last five years combined in Faribault,” Reuvers said. “The pride she had in her face, not only the crowd but that Chanhassen had a team on the field.”

The Red Birds played their first two seasons as a Class C team but Kemble wanted the team to play tougher competition from the start.

“This was her, ‘I think we should play in these tournaments, we should play against Class A teams,’” Reuvers said. “‘Oh, homegirl is serious.’ I didn’t know what expectations were going to be.”

Chanhassen had a town team until the mid-1960s and reached the state tournament back in 1949. It would be another 63 years before the Red Birds appeared at a state tournament. In 2012 they clinched a spot in the Class C state tournament, which signaled the start of bigger things in the future.

As the roster filled out and began to include more former college players, Chanhassen rose to Class B and reached the state tournament in 2017. The Red Birds came through the championship bracket before losing twice to defending champion Miesville on Labor Day for the championship. It’s been the last time Chanhassen has lost a Class B title. The Red Birds have won four consecutive state titles, a feat not seen since Albert Lea won five straight titles from 1944-48.

Though she does much of the behind the scenes work, Kemble does a lot of the field work, too.

“She’s still out there every game,” Strand said. “She stripes the field every game. Early on, Terre was dragging the field, cleaning up the mound and home plate. Sometimes I have to help her get the paint out for the sprayer. She’s always complaining but she always does it.”

Perhaps the Minnesota mentality has rubbed off on her.

Kemble has spent countless hours volunteering within the Chanhassen community and the Red Birds have become another extension of that. In fact, the way the team found a public address announcer came when Denny Laufenburger introduced himself to her after she received the Chanhassen Rotary’s Distinguished Service Award.

“She has unbounded energy for doing things for others,” Laufenburger said. “She loves what she does and she pours her heart and soul into it.”

Kemble hasn’t had difficulty navigating the boys’ club of baseball and some of that stems from her personality.

“She doesn’t believe there’s any difference between men and females,” Strand said. “I know she’s felt a little bit at times like an outsider in the baseball community but I think she’s earned the respect.”