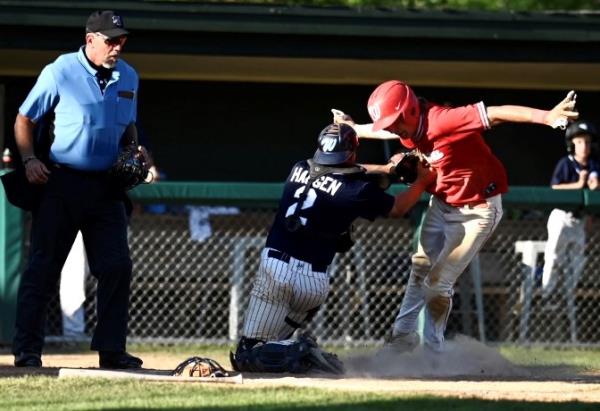 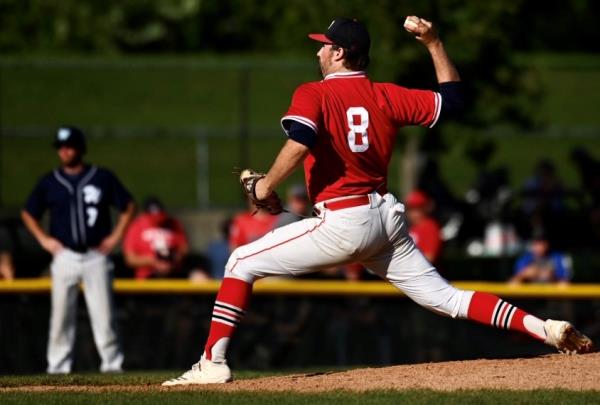 The Watertown Red Devils continued their hot hitting in the Class C semifinals with 14 hits in defeating Watkins 6-3 Sunday at Chaska Athletic Park.

With the win, the Red Devils advance to the state championship game at noon Monday versus Sobieski at Waconia.

Ben Smith led the hitting attack, going 3-for-5 with a run scored.

Nolan Geislinger and Brendan Ashton each had multiple hits for Watkins. Geislinger went 2-for-5 with a run scored. Ashton finished 2-for-4.

Watertown took a 1-0 lead in the top of first. Pat Tschida led off with a walk, stole second, went to third on a ground out and scored on an error.

Watertown's Jake Anderly tripled and scored on a single by Jadrien Keavy in the top of the sixth to make it 5-0. Tschida stole home on double steal to up the Red Devils lead to 6-0.

Watkins scored two runs in bottom of sixth to cut the Watertown lead to 6-2. Nolan Geislinger led off with single and went to second on an error. Lincoln Haugen singled. Kevin Kramer singled in Geislinger. Dan Berg singled in pinch runner Landon Neiman.

Watkins scored a run in bottom of eighth to cut the Watertown lead to 6-3. Nolan Geislinger led off with a single and was forced out at second on a ground out by Haugen. Dan Berg was hit by a pitch. Ashton singled to load the bases. Justin Thompson reached on an error on a ground ball to the shortstop to drive in Berg.

Jonah Lewis finished up for Watertown on the mound. He pitched 2 2/3 innings, allowing one run on two hits and no walks. He had three strikeouts, including the first and third outs in the bottom of the ninth.

Watkins starting pitcher Isaac Benesh, a draftee from St. Joe, threw 2 1/3 innings and allowed four runs on seven hits and one walk while striking out two.

Matt Geislinger pitched the last 6 2/3 innings, giving up two runs on seven hits and no walks with seven strikeouts.

The Watertown Red Devils had their hitting shoes on, banging out 17 hits in defeating Milroy 10-0 in eight innings Sunday afternoon in the Class C quarterfinals at Chaska Athletic Park.

Pitcher Pat Tschida shined on the mound and at the plate. He threw a five-hit shutout with one walk and six strikeouts in eight innings. He also batted 3-for-4 with a double, walk, RBI and run.

Watertown jumped to 2-0 lead in bottom of second. Tschida led off with an infield hit, Ben Smith reached second on a throwing error, Mitch Kelzer drove in Tschida with a ground out to second, and Zach Iten singled in Smith.

The Red Devils increased their lead to 3-0 with run in third. Jadrien Keavy beat out a bunt single, Tschida doubled down left field line, and Kelzer hit a sacrifice fly to drive in Keavy.

Iten hit a two-run home run to left to up the Watertown lead to 5-0 in the sixth. Kelzer, who doubled, scored ahead of him.

The Red Devils upped their lead to 6-0 with a run in seventh. Anderly beat out a bunt single and scored on an RBI single by Tschida.

Watertown scored five runs in the eighth to take an 10-0 lead and end the game on the 10-run rule. Iten reached on an error. Hangartner singled and went to third on the throw to third. Butler hit a ground rule double to left center that went under the fence and drove in Iten and Hangartner. Andrew Nichols doubled. Andrew Meyer doubled in Butler. Anderly doubled in Nichols for the walk-off win.

Jeremy Hinderks of Sacred Heart faced one batter and allowed one hit, by Anderly, that ended the game on the 10-run rule.

No rest for the weary, Watertown heads right back on the field to face Watkins at 4:30 today at Chaska.

Justin Thompson and Matt Geislinger combined on a four-hit shutout to lead Watkins to a 2-0 win over St. Patrick in the state Class C quarterfinals Sunday at Chaska Athletic Park.

Thompson started and went 7 1/3 innings with no runs on three hits and two walks while striking out seven to pick up the victory.

Geislinger entered for Watkins with two on and one out in top of eighth and got two ground outs to get out of the inning and struck out the side in the ninth to earn the save. Geislinger threw a no-hitter in the Clippers' 3-0 win Saturday against St. Martin.

Watkins scored the only runs in the third inning, taking a 2-0 lead. Nolan Geislinger led off with a single. Lincoln Haugen hit a sacrifice bunt. Kevin Kramer singled. Dan Berg reached on error to score Geislinger. Brendan Ashton singled to load the bases. Justin Thompson hit a sacrifice fly to drive in Kramer.

Reliever Zak Endres shut down the Clippers without allowing a run, hit or walk, while striking out two in two innings pitched.

Kevin Kramer and Brendan Ashton with went 2-for-4 for Watkins. Dan Berg batted 2-for-3. Nolan Geislinger went 1-for-5.

Watkins advances to the semifinals at 4:30 p.m. today (Sunday) at Chaska against the winners of Watertown and Milroy who play next at Chaska.