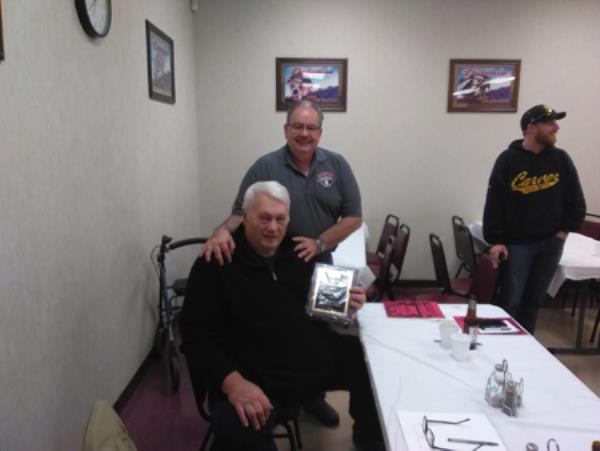 *This story originally appeared on the Herald-Journal website and is reprinted with permission.

NEW GERMANY – Amateur baseball is all about volunteering your time. No one’s done more than that for the past two decades than Gerald ‘Beans’ Roepke of New Germany. After serving as Region 7C commissioner for the past 20 years, Roepke announced his retirement last summer at the end of the Region 7C tournament, but it became official at the fall Crow River Valley League meeting.

“I enjoyed working with all the teams from the past and present,” Roepke said. “Everybody was always very cooperative. I can’t thank everyone enough for the support. It’s just a good feeling. When Bob Hope went overseas to entertain the troops and his show came to an end, he would walk to the front of the stage and say thanks for the memories. That’s what I want you to remember from this. Thanks for the memories.”

While the memories are abundant for Roeke during his time serving Region 7C and the Crow River Valley League, it was simply the right time to have someone else step in.

“My choice of retiring as commissioner marks 20 years,” Roepke said. “I felt it was time to have a change. It’s time to get some different blood in there with different ideas.”

The name ‘Beans” goes back to his playing days for the New Germany Dutchmen. A member of the Amateur Baseball Hall of Fame, the nickname has stuck with him all these years as he’s continued to be around the game of baseball.

“His presence will be missed greatly,”  Minnesota Baseball Association board member Jason Kuerschner said. “This past summer after the Region 7C Tournament when Beans announced he was retiring, it was a testament to his work within the Region that he received a well-deserved standing ovation by the fans in the league.  This was a tremendous moment for Beans to know that he has left his mark on our league and region that will not soon be forgotten.”

Whether it was his playing days for the Dutchmen or his time as Region 7C commissioner, people knew the name.

“I started playing for Green Isle in 1968 so I know Beans very well,” Joe Kreger said. “New Germany had excellent teams in the 60s and 70s. Beans was a big part of those teams. He was a powerful hitter and a good first baseman. He always acted like a gentleman on and off the field. His later service to the league as regional commissioner was done in the same mode. He’s fair and gentlemanly. A wonderful man.”

Roepke’s career has been filled with a love for the game. No matter what hat he was wearing, he always did what was best for the game.

“One thing that would come through on (Beans) is that it wasn’t all about Beans,” Kuerschner said. “It was the teams that he played on.  He may have been one of the better players but that didn’t matter to him. It was the result of the team.  This carried through his whole life as he served on many boards outside of baseball. With baseball, it was never to help one particular team or league. It was what is best for the whole of amateur baseball.”

The CRVL and Region 7C has become one of the top attractions in the state when it comes to amateur baseball over the years. He’s been there for all the big moments, helping put amateur baseball in the spotlight.

“For those who don’t know Beans, he is a large man, which can be intimidating at first,” Kuerschner said. “However, once you get to know the man behind the large hands and a very strong handshake, you realize that he is the biggest teddy bear with a heart of gold. Over these many years working with Beans on our mutual passion for amateur baseball, we have developed a wonderful friendship and comradery.  We have had many long conversations about family, work, and of course baseball. Beans has a wealth of knowledge about the history of amateur baseball in the area, and part of me wishes I was able to watch when he did play and see some of the feats firsthand that he accomplished. I cherish the opportunity to listen to those stories from Beans firsthand instead.”

Region 7C has been in good hands over the past 20 years with Roepke. Attendance numbers have continued to rise each year for the tournament, and you can bet you’ll still see him with a smile at a local park near you.

“I want to thank Beans personally for including me in the decisions of the region over the past 15 or so years,” Kuerschener said. “I want to also thank him for the friendship that he has shown me over these years as well.  I also want him to know that I love him for all this and all the times he has stood up on my behalf.  While we won’t be working together anymore at the region level, I do look forward to seeing him at a baseball game during the summers for many seasons to come.”