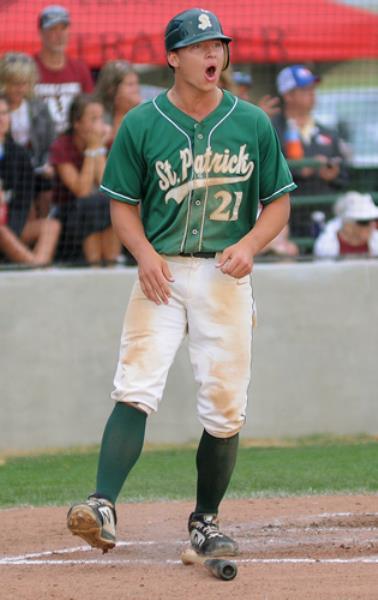 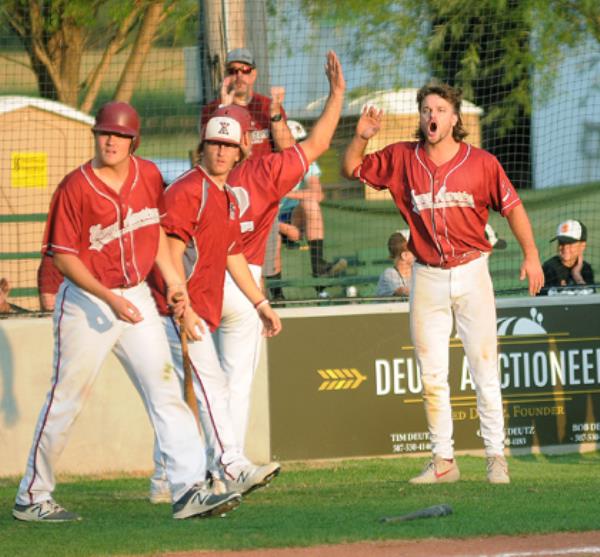 The tension thickens with a trip to the state championship game on the line and even a knife couldn’t cut it Sunday between St. Patrick and Young America in Milroy.

The tempers flared in the first inning, simmered for a bit, before reigniting in the fifth. But that’s state tournament baseball at its finest. The Irish and Cardinals turned in a classic with St. Patrick securing a trip to the Class C championship game with a 6-4 victory.

After a throw to first with a runner on, Young America starting pitcher Josh Lenz reacted to something said from the Irish dugout and that set the tone the rest of the way.

St. Patrick responded with two runs in the bottom of the second inning after Seth Ambroz reached on an infield single, moved to second on a bunt and got to third on a Ryan Friedges single. Zak Endress hit a sacrifice fly to left field to score Ambroz and Jace Westman drove in Friedges with a single.

The Cardinals, who lost 3-2 to Buckman in 17 innings in the third round last year and to Sobieski in the semifinals the year before, put four runs across in the third inning. Brice Panning and Matt Mann hit back-to-back singles and Roch Whittaker walked to load the bases for Hunter Rickaby. He came through with a two-run single to tie the game. Cole Peters put Young America up 4-2 with a two-run single.

The Irish chased Lenz in the third inning after scoring three runs to draw the game to 4-3. Jordan Goracke, Kyle Rhodus and Matt Ambroz all singled to start the inning with Matt Ambroz driving in Goracke. After a double play and a walk, Friedges singled to score Matt Ambroz to tie the game 4-4. That brought in Christian Johnson, a draftee from Cologne to pitch for the Cardinals. Johnson threw eight shutout innings earlier in a 9-1 win over Bird Island where he struck out 11 and allowed five hits. Zak Endress singled to score Dom DeLuca and put St. Patrick up 5-4.

The Irish got another run in the fourth after Jack Friedges drew a lead-off walk and Goracke doubled to right field to score Friedges for a 6-4 lead. Matt Ambroz singled but Set Ambroz hit into a double play for the second time, this time it ended the inning.

Then Johnson got locked in. Johnson set down the side in order for the next three innings, striking out nine consecutive along the way. He threw 214 pitches on the day and allowed just three hits against the St. Patrick

Less flashy, though just as effective, Joe Grote, a draftee from Faribault came on in relief of starter Christian Medick with two outs in the third inning, to throw 6 1/3 innings of scoreless relief. He allowed just one hit, walked two and struck out four.

The eighth got chaotic after two plays at first base involved slight collisions. Following the second play, Young America shortstop Blake Pistulka got ejected and later a Young America fan or fans got ejected as well for abusive language toward the umpire.

St. Patrick will face Fairmont for the Class C championship at 11 a.m. The Martins defeated Cold Spring 10-3 in the other semifinal.

There’s nothing like having pitching depth in the state tournament.

Young America has it and opted to use Christian Johnson, a draftee from Cologne, to start Sunday against Bird Island in a game to send them through to the semifinals. The Cardinals were in good hands with Johnson, who threw eight innings, allowed five hits, walked three and struck out 11 as ace Josh Lenz rested a little longer before his start.

Young America gave him plenty of support so he didn’t have to worry about much on the mound.

The Cardinals took control of the game with a five-run fifth inning. Dillon Whittaker hit a lead-off single and Cole Peters reached on a bunt single. Blake Pistulka reached on a fielder’s choice, Whittaker scored on an error when a throw to second sailed into center field. Pistulka advanced to third and scored on a single by Isaac Hormann. Brice Panning reached on an error and that brought on Raymond draftee Alex Lotthammer to replace Bird Island starter Casey Lewandowski. Lewandowski allowed four runs, two earned, on six hits. He struck out four.

Hormann stole home to make it 5-0 and Lotthammer retired Matt Mann before Roch Wittaker hit a towering two-run home run to extend the lead to 7-0.

Lenz hit a lead-off triple in the eighth and later scored on a wild pitch to make it 8-0.

Young America grabbed a 2-0 lead in the top of the first after Hormann led off the game with a single. An error allowed Panning to reach and Mann drove in Hormann with a single. A ground out from Hunter Rickaby scored Panning. Hormann finished 3-for-5 with two runs and two RBI

The Bullfrogs got their lone run in the bottom of the ninth when pinch hitter Trevor Nissen hit a solo home run to left field.

St. Patrick went about its business in workman-like fashion Sunday in Milroy to claim the first of the final four spots in the state tournament with a ho-hum 2-1 win over Bluffton.

St. Patrick started scoring the third time through the lineup in the fifth inning. Zak Endress hit a lead-off single and after a sacrifice bunt moved him to second, Jack Friedges came through with an RBI single. One batter later Kyle Rhodus singled to score Friedges for a 2-0 lead.

Bluffton responded in the next inning by collecting back-to-back singles from Cody Geiser and Jake Dykhoff. A back pick throw sailed away at first base to move both runners into scoring position. Justin Dykhoff came through with a sacrifice fly to make it 2-1.

The Braves, who knocked off perennial power Sartell Saturday 1-0 in 12 innings, gave the ball to Justin Dykhoff, who threw four innings in relief of Jake Dykhoff the night before. Justin Dykhoff picked up where he left off the night before to throw four more shutout innings but St. Patrick started to get to him in the fifth inning. He went 7 ⅓ innings in his start, scattering nine hits, walking one and striking out eight.

Bluffton had a chance in the top of the ninth for some more magic when Kyle Dykhoff led off with a walk. Kevin Tumberg walked with two outs but Grote got a strikeout to end the game.

Cody Geiser, Jake Dykhoff and Josh Dykhoff all had two hits for the Braves.

Friedges and Endress each had two hits for the Irish, who play the winner of Bird Island-Young America Sunday at 6 p.m.