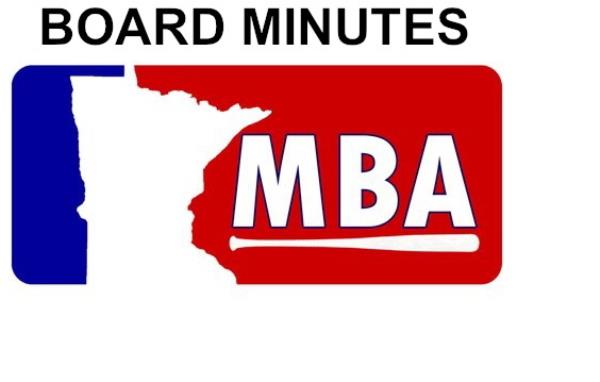 MINUTES OF THE BOARD

Meeting called to order by President Richter at 10:30 AM

Roll call showed all Directors present with the exception of Hartmann

Motion Brennan, seconded Kreger, carried, to approve the minutes of the previous meeting.

There were 18 dedicated baseball people in attendance.

The Calendar of Events was discussed.  Motion Forsman, seconded Nagel, carried to approve the calendar of events for 2015.  The official MBA calendar will be posted on the MBA Website.

Dan Phelps, Sales Representative for Rawlings was in attendance.  He addressed the Board and assembly on the low seam baseball and passed around samples to show what they were made of.  The question the Board had was to make sure that this was the same ball used in this year’s state tournament and did it meet the specifications that the Board approved at the January meeting in 2012.  Phelps indicated that it met the specifications.  The Board was satisfied with the ball as there were no issues at the tournament.  However, there were some concerns from teams during the regular season.  Phelps remarked that any team that had a problem should take a picture or send a sample of the ball and they would test it and if it failed inspection they would make any restitution.  Dan Phelps contact information is as follows:

The Board reviewed and made changes to the 2015 MBA Handbook.  Motion by Barry, seconded Nagel, carried, to approve all the changes made.

Tournament Chairpersons Dave Hinkemeyer and Drew Van Loy – Cold Spring and Bruce Geislinger - Watkins were present to give an update on the details of their respective fields and work that was completed this fall, as well as, discuss projects for next spring in preparation for the 2015 State Tournament.  Cold Spring has built a new concession stand, new seating in grandstand, sports deck and new turf on the mound.  Watkins has put up a new fence, complete new infield, sports deck down the right field line, and installed some 400 stadium seats in their new grandstand.  Both sites said that they still have work to complete, but they feel that they are right on schedule.

The Board asked Cold Spring and Watkins if they would be interested in having a booth at Twins Fest which will be held at Target Field in January.  The Board will pay for the rental of the booth, but they would be responsible to man it.  Contact Dave Hartmann what you plan to do.

Joe Kunkel, Monticello, addressed the Board saying that they were forming a new league which would be called the “West Central League”.  Teams in the league are Monticello, Ramsey, Albertville, Rogers, Hamel, and Elk River.

Sections were next addressed.  After a lengthy, there was a motion by Barry, seconded by Kreger, carried, to approve the new section alignment for 2015.  In Sections #2 and #5 teams will be placed by the Metro Minny League Officers.  The League also must select two commissioners for these Sections.  The Board would like to have this completed by December 15th

Sections will one line once they are complete.

The State Tournament format for 2015 was discussed.  At the Annual Meeting in October a survey was taken with the Commissioners in attendance on what they thought about the state format.  Class C Commissioners were in favor of keeping it the same.  Class B Commissioners had a split vote.  With this said, the floor was open and a lengthy discussion followed.  After hearing sides, a motion by Kreger, seconded Forsman, carried to maintain the same format for Class B-C the same in 2015.  The Board felt the tournament went well and that only after a year trial with single elimination it would only be right to give it another year.

Mike Sticha from New Prague who is one of the host tournament sites in 2018 gave a summary report on their field.  He said everything is coming along fine.  He stated that there is still a lot of work to be done.  He also noted that the City of New Prague is 100% behind them.

The Board after due process is replacing Keith Hanson as Region #10 Commissioner.  Reasons for this action were numerous eligibility problems, as well as, neglect of getting paperwork in on a timely basis.  We are looking for a new Commissioner.  Anyone interested, please contact Dave Hartmann.

Randy Heidmann, President of the Victory League told the Board that keeping the “College Rule” was not fair.  He thought that a college student should be allowed to play for local teams or Class “C” teams and not to be restricted to playing only Class “B”.  The Board’s response was this rule may not always seem fair, but was put in place to protect the smaller Class “C” teams that are not able to get college players from teams within radius of colleges from loading up.  We are not depriving anyone from playing, there are always Class B teams looking for players.

Some of the new changes made in the 2015 MBA Handbook:

All Classes may have a 25 player roster

Tournament bidding – Teams will be eligible to bid after 5 years, rather than wait 10 years

Just a reminder to all teams; a player cannot be signed to a contract before March 15th, or after June 30th.

Being no further business, motion Nagel, seconded Barry, carried, to adjourn at 1:30 pm

Next meeting of the MBA will be Saturday, January 10th, 2015 at the Prairies Edge Casino, Granite Falls, MN at 1:00 PM

Happy Holidays to everyone!!!!