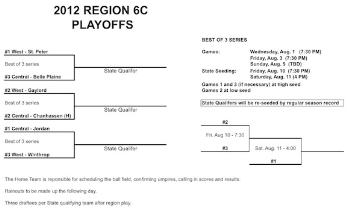 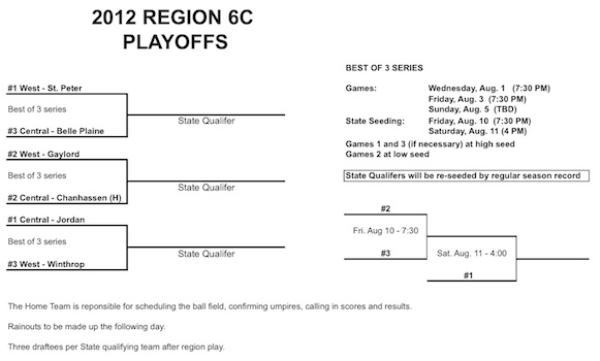 St. Peter will match up with Belle Plaine, Chanhassen with Gaylord, and Jordan against Winthrop. Games one (Wednesday) and three (Sunday – if necessary) will be played at the high seed and game two (Friday) at the low seed. State tournament seeding will be determined the following weekend on Aug. 10-11. The three State qualifying teams will be re-seeded according to regular season record. The No. 2 and 3 teams will face each other on Friday with the winner playing the No. 1 seed Saturday for the region title and first round bye at the State tournament. State qualifiers will be rewarded with three draft picks each, which will be selected from the eight eliminated RVL teams.

Belle Plaine is making its sixth-straight trip to regions after winning the consolation round of the RVL Central playoffs. The Tigers went an even .500 (7-7) in the league and enter with a 17-12 overall record.

The one-two punch on the hill for the Saints has been second-year Jeff Wenner and veteran Jesse Anderson. The two have combined for 130 of the team’s 220 innings. Wenner is 6-1 in eight starts with a 1.87 ERA and a .199 opponent’s batting average. Anderson is 6-2 in nine starts with a 3.34 ERA and a 57:10 strikeout-to-walk ratio.

On the rubber, Brad Lawson and Shane Hofmann have seen the most action, accounting for a combined 111 of the team’s 235 innings. Lawson has a 1.96 ERA with a 5-2 record in seven starts, while opponents are hitting just .192. Hofmann is also 5-2 in 10 starts. The veteran has allowed only 11 extra-base hits in 250 at-bats.

In just its third year as an organization, Chanhassen has reached regions each season. The Red Birds fell in the RVL Central title game to Jordan, earning the No. 2 seed. They went 10-4 in the league and are 19-11 overall.

Gaylord makes a return trip to regions for the first time since 2007 after sweeping Fairfax in the division playoffs. The Islanders went 7-8 in the league and are 11-10 overall after starting the season 2-9 – they have also won their last six games.

Brad Walsh and Trevor Vaubel is the Islanders one-two combo on the mound. Walsh has a 2.73 ERA with just one loss on the year, while Vaubel also has just one loss and a 2.55 ERA.

Chanhassen will have home-field advantage in the series since it won the regular season head-to-head match-up 8-4 back on May 13 in Chanhassen.

Jordan has been a constant power in the RVL as a Class B team and has found that same success in its first year at the Class C level. The Brewers went undefeated (14-0) in the league, topped off with an RVL Central crown over Chanhassen. The No. 8-ranked MBA Class C team enters at 26-10 overall.

Winthrop has been known to go unnoticed throughout the regular season, only to turn it on come playoffs, and that turned out to be the case once again. The Eagles upset Fairfax with a two-game sweep in division playoffs earning their sixth trip to regions in the past 10 years. The Eagles went 3-12 in the league and enter with a 5-15 overall record, but they always seem to be a different team during the postseason.

Hollingsworth is also the ace of the staff with a 1.53 ERA and 5-1 record. The veteran has tossed 59 innings and compiled 71 Ks compared to 17 walks. Mitch Bockenstedt and Alex Beckman round out the top three hurlers. Bockenstedt is 8-1 with a 1.92 ERA in 65 and two-thirds innings, while Beckman boasts a 3.94 ERA and 5-3 record after 59 and one-third innings.