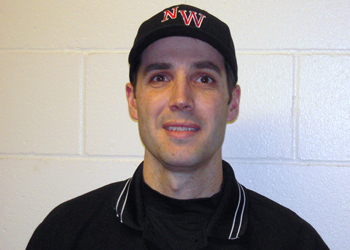 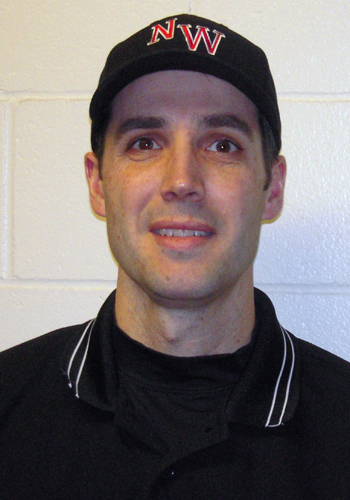 Terry Helget trys to deflect attention from himself, but as talented as he is, he is bound to be noticed.  He will be playing in his 25th year of amateur baseball this summer--all for the little community of Essig.  He also has umpired in every State Tournament since 2002 (with the exception of 2003 when Essig was busy finishing in the Class C top six ).  He had two stints as the Essig manager, 1996-99 and 2005-10 and holds almost all of the records for the Bluejays:  at bats, hits, runs, rbis, games, innings pitched etc.   He is quick to note that Doug Radloff holds the home run record.

"He's a good young umpire," says Shawn Vellek, a veteran Northwest Umpire.  "He brings his lunch pail and goes to work and that's what we want our guys to do.  Hardhats and lunch pails advance in our group."

"Chop wood and carry water," says Andre Lanoue head of the St. Paul Park and Rec and another Northwest Umpire veteran.  Helget is the personification of that attitude.

"It's always kind of a goal of mine to remain as low-key as I can during the amateur tournament, being an umpire that also plays.  Some people probably feel I shouldn't do both, but I guess I feel that as a player also, I have a special "feel" for the game and know just how important it is to the players to be there and want to do a good job for them," said Helget.

Helget, 43, should know something about the game.  He was raised in a baseball atmosphere.  His dad Marlin, the middle of seven boys that all played for Stark in its glory-days, took him to game after game where Terry started as a bat boy, chased foul balls and played on the field after the "big guys" were done. (Click here to see a PBS show on the Stark town team and Click here for a story by Jim Caple of ESPN on Stark). Stark got a lot of publicity because they sometimes had nine Helgets playing at the same time and they were also good. Terry explained that usually it was only seven Helgets--Someone else usually batted first and ninth because the Helgets weren't "punch and Judy" hitters and speed wasn't their strong suit.  "They rarely lost and when they did, it did not go over well," said Terry.

Terry is the oldest of eight children, four boys and four girls.  He started playing in the old Bi-County League for Essig in 1980. The Bi-County was a league sponsored by the MBA for young ballplayers that were 18 and under.   His first amateur year in Essig was 1988.  Stark had broken up when a couple of the Helget cousins decided to go to Sleepy Eye in 1986 and 1987, so Marlin moved over to Essig and managed the Bluejays through 1994.   Terry has been catching and pitching for the Bluejays ever since.  "I just paid my $25 player fee yesterday," said Helget, " so I will be back again this year."

Terry started umpiring in 1996.  He had a natural mentor in his dad as Marlin had started the year before.  They worked a lot together which Terry described as "fun."  "Nice father-son thing--we did a lot of High School Section games together and they liked to hire us because we weren't afraid to make the tough call.  We knew what we were looking for.  We could anticipate certain things and could be in the right spot for the most likely play to happen," stated Helget.    When asked about Terry, Marlin had this to say, "He works hard at it, he really does.  He was always prepared.  You can tell the ones that do it and don't.  The more you do it the better it is for everybody and Terry does it."

"I got to realize that this is kind of fun...I seemed to have a knack for it, so I started to attend more clinics, joined Northwest Umpires College group in 2004  and that's when things really started to open up for me as far as what is out there umpire-wise, said Terry.  "Joining that was probably the best thing I ever did, as far as my umpiring career goes, with Shawn Vellek and all the guys in Northwest."  He has also gone to three of the last five College umpiring clinics in Springfield, Mo.  "It's very helpful to work with guys that have worked the Division I World Series in Omaha," said Helget."

That has progressed to Terry working DII and DIII regular season and playoff games.  This year he will be the Umpire in Chief of the DIII Midwest Regional and has also been selected as one of eight umpires in the nation to work the DIII College World Series in Appleton, Wis.

Terry figures he will work around 70 baseball games this summer.  That is cutting back because he is still  playing and his three children, all play sports too.   His daughter Maddy is a junior in high school, son Jay is a freshman and daughter Mallory is in sixth grade.  Son Jay is a catcher just like dad.

It isn't only the summertime that Terry is busy.  In the winter he referees high school basketball and some college women's basketball also.  He has done three State High School League final games--two boys' and one girls'.  He works 35-40 games a year while attending his kid's basketball games too. Terry's wife Tammy is a big supporter.  "She's great, I want to thank her for everything.  Without her support it just wouldn't work.  She knows what it takes to do what I'm doing and she is great," he said.

As the umpires say, "You'll be successful if you can handle the 'Game within the Game.'  Terry Helget can do that.